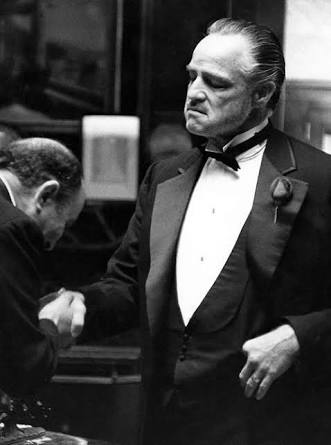 I watched the classic movie adaptation of Mario Puzo’s novel The Godfather for the umpteenth time last week. Twenty-five years after the last of the triology was released, the movie is still interesting and captivating. So let’s look at the lessons one can pick up from the movie.

Don Vito Corleone’s first child Santino (Sonny) was hot-headed and that was his undoing. He smashed cameras, yelled at the Don’s consigliere Tom Hagen and publicly beat the sister’s husband, Carlo to a pulp. In the end, he became predictable, manipulable and was massacred.

2. Money is always an issue even amongst friends.
“Friendship and money. Oil and water” – Michael Corleone

How often have we heard people say “don’t mix friendship with business”? Friendship tends to take a back seat in business because everybody is out to make profits. It is all about personal interests and this can put a strain on a friendship.

3. Wisdom is better than strength.
“The sicker you get, the wiser you get” – Kay Corleone
“Women and children can afford to be careless, but not men.” – Don Vito Corleone

Initially, Sonny was perceived to be stronger thn Michael but in the long run, Michael proved to be a better don with his wisdom. Sonny was temperamental and acted on impulse whilst Michael was wise, intelligent and calculative.

4. Power intoxicates like wine.
“Power corrupts those who do not have it.” – Calo

Vito Corleone built the Don Corleone empire on friendship, humility, loyalty and family. This earned him respect, love and power. He was never power drunk or money conscious; all he asked in return was friendship and loyalty. However, Micheal was the complete opposite. He focused so much on power and money, and succeeded in legitimising the family business but lost all the friends and family around him. He drove his wife, Kay, away, murdered his brother Fredo and his sister Connie’s husband, and questioned Tom’s loyalty – the only person that was ever present for him. He ended up alone and abandoned in contrast to Vito who died at an old age in the midst of family and friends.

5. Violence is the last resort.
“Once war erupts, lives are lost, business close down or completely halts. I don’t like violence Tom. I am a business man. Blood is a big expense.” – Don Sollozo
“I hoped we could come here and reason together. And, as a reasonable man, I’m willing to do whatever’s necessary to find a peaceful solution to these problems.” – Don Vito Corleone

Despite being a movie centred on the Italian mafia, it is interesting to note that diplomacy was chosen over violence throughout the movie. Don Vito Corleone was always diplomatic and always made an offer you can’t refuse.

6. Family is everything.
“A man who doesn’t spend time with his family can never be a real man. The only wealth in this world is children, more than all the money,  power and wealth” – Don Vito Corleone

The movie depicts Vito Corleone as a family man who gave everything for his family. He adopted Tom Hagen as his son just like the Abbandando family adopted him after he fled Sicily. He repaid the Abbandandos, by making Genco Abbandando the first consigliere of the Corleone family.

7. Keep your business private.
“Never tell anyone outside the family what you are thinking again.” – Don Vito Corleone

Every family has secrets that are exclusive to them. It’s best to keep your business private. Don’t discuss your personal or family issues/business to outsiders. Someone may use the information in their favour or for their own personal gain.

8. Afford people some level of privacy; don’t meddle in their affairs.
“Sonny don’t get involved.” – Carmela Corleone to Sonny after he tried to break the fight between the sister Connie and husband Carlo at the dinner table.
“It don’t make any difference to me what a man does for a living, you understand.” – Don Vito Corleone

Everybody wants a little privacy. Try to mind your own business. Don’t take aspirin for other people’s headache. Giving personal advice on personal matters is a no-no unless your opinion is sought for.

People often get emotional and take sides in every situation and become biased. The emotions cloud what they think they see. Don’t make decisions when you are angry and don’t make promises when you are happy.

10. Don’t mix business with pleasure.
“I’m here on business I leave tomorrow now get rid of them. Come on, I’m tired. Get rid of the band, too.” – Michael Corleone to his brother Fredo after the latter offered him some girls.

We all struggle to maintain focus in our daily lives. Mixing business with pleasure can derail your focus and make you lose the big picture. Michael was a very focused business man, which helped him to come up with a solution to problems at a quicker speed.

11. Respect is earned not given.
“Now you come and say “Don Corleone, give me justice.” But you don’t ask with respect. You don’t offer friendship. You don’t even think to call me “Godfather.” – Don Vito Corleone

We often delude ourselves that we are owed respect because of our talent, money, fame, beauty, intelligence etc. The naked truth is that no matter how awesome you may think you are, no one owes you shit..you have to earn it. Don Vito Corleone earned the respect of people in his neighbourhood by making sure he addressed the concerns of the people unlike Don Fanucci who terrorised the neighbourhood and let them weak his beak a little.

12. Health is wealth.
Good health is the most important thing. More  than success, more than money, more than power – Hyman Roth

This is just to reiterate what we already know. A healthy man is a wealthy man. Just because you are trying to make ends meet doesn’t mean you shouldn’t pay attention to your health and take care of yourself. Exercise often and watch what you consume.

13. Don’t cry wolf too often lest people will doubt your sincerity.
“He’s been dying from the same heart attack for the last twenty years.” – Michael Corleone

Regurgitating your words will make it hard for people to believe whatever that comes out of your mouth overtime. Hyman Roth kept complaining about his deteriorating health to a point that no one believed him anymore. Michael eventually got tired of his complaints and made him sleep with the fishes.

14 First cut is the deepest.
We all carry emotional and physical scars from life battles but first cut is the deepest. And it will always be. Our past will always determine the way we act in the present and see the future. Don Cicci massacred young Vito Corleone’s family and made him an orphan. He only escaped because the mum held a knife to Don Cicci’s throat and let him abscond. He never forgot that and returned to Sicily years later to kill Don Cicci.

15. Jealousy is for the weak.
Movie star, Arnold Schwarzenegger once said ‘Everybody pities the weak; jealousy you have to earn .’ We only feel jealous towards others when we think we are in direct competition with them. Fredo Corleone was annoyed by his father’s decision to make Michael the next Don following the death of Sonny. Hyman Roth played on Fredo’s weakness, naivety and jealousy for his younger brother, Michael and used him as a pawn in an unsuccessful attempt to eliminate the Don.

What did you learn from the movie that I omitted? Please do tell.