My buddy, Max and this girl, Nkechi have been platonic friends for some years now. They met at Max’s elder brother’s wedding. Max was bewitched by Nkechi’s beauty and endowments. As a fast guy, he made the move and got to know her. They exchanged numbers and BB pins. They fixed a date two weeks after wedding and that’s where things went awry for my friend.

Max wanted a relationship with Nkechi but she didn’t want the same, she just wanted a friend to talk to and lean on when she’s troubled. Due to the fact that he really liked her, he didn’t mind just being the guy she pings or calls when she’s bored because he wanted to be close to her at all cost with the hope that one day things will go his way. Poor Max, if only he knew he’s been friend zoned.

The term “friend zone” was popularized by a 1994 episode of the television sitcom Friends, where the character Ross (played by David Schwimmer), who was lovesick for Rachel (played by Jennifer Anniston), was labeled “mayor of the Friend Zone”.

Friend zone is when a member of the opposite sex (usually one you want to hook up with) declares you to be “just a friend”, thereby ruining all potential chances of sex. Friend zone is basically a preemptive rejection where people get too comfortable with someone and see them as only a special conversation/sharing info partner ‘a friend’ and unconsciously reject the person as a sexual opportunity and would be shocked and appalled if that was brought up.

When a guy agrees to be friends, he’s forced to stifle his attraction while regularly seeing and talking to the woman he’s attracted to. She discusses her love life and has the audacity to ask his advice on it. He performs occasional “manly” household and automotive favours for the women. Essentially, he does everything a boyfriend would do – without the benefits. Friend zone means holding her shit while she shops for underwear you will never see her in.

The act of Friend-zoning is mastered by the ladies. Girls friend-zone their suitors due to so many reasons such as: Insufficient attraction to the man, misinterpretation of nonverbal cues from the man signaling his interest in deepening the relationship, and there is sexual repulsion (but not enough to block a friendship) but when given a taste of their own medicine, you’d see them whining and complaining. E.g. I’ve tried everything for Alex to like me, it’s not working. It’s as if he doesn’t know I exist. He doesn’t even touch me; I want him to make me feel like a woman. 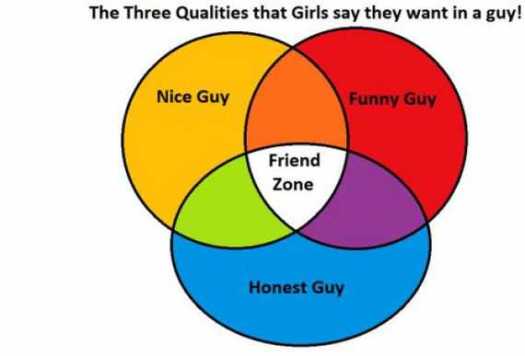 In my opinion, it is very easy for a guy to like and date a girl out of pity (for all she’s done for him) and persistence but very hard for a girl to return the favour. If you are a guy dating a girl you have wooed for years, she could be dating you because you are opulent or there’s no one else in her life at that moment and she’s ‘managing’ you for the mean time until a ‘better’ dude comes along. After all, nobody wants to be lonely and we all love it when somebody loves and cares for us.

Despite the pitfalls of friend zones, some have argued that a man can benefit from actively cultivating a friend zone once an interaction or relationship with a potential partner has entered one. The theory here is that the friend zone may evolve into something more, particularly if the man establishes an air of trustworthiness and intimacy that his partner finds attractive and has never shared with previous romantic partners.

17 Replies to “FriendZone…We All Hate That Shit”